The blacktip shark (Carcharhinus limbatus) is a species of requiem shark, and part of the family Carcharhinidae. It is common to coastal tropical and subtropical waters around the world, including brackish habitats. Genetic analyses have revealed substantial variation within this species, with populations from the western Atlantic Ocean isolated and distinct from those in the rest of its range.

Swift, energetic piscivores, blacktip sharks are known to make spinning leaps out of the water while attacking schools of small fish. Both juveniles and adults form groups of varying size. Like other members of its family, the blacktip shark is viviparous; females bear one to 10 pups every other year. Young blacktip sharks spend the first months of their lives in shallow nurseries, and grown females return to the nurseries where they were born to give birth themselves. In the absence of males, females are also capable of asexual reproduction. Common names used for the blacktip shark include blackfin shark, blacktip whaler, common or small blacktip shark, grey shark, and spotfin ground shark.

Blacktip sharks are commonly encountered by divers and coastal fishermen in South Africa. During the sardine run they are frequently encountered feeding on shoals of sardines, anchovy and other bait fish. Whist they do not appear to generate or maintain baitballs, the blacktip sharks are one of the primary opportunistic predators once a baitball forms.

The Blacktip shark has a robust, streamlined body with a long, pointed snout and relatively small eyes. The five pairs of gill slits are longer than those of similar requiem shark species. The jaws contain 15 tooth rows on either side, with two symphysial teeth (at the jaw midline) in the upper jaw and one symphysial tooth in the lower jaw. The teeth are broad-based with a high, narrow cusp and serrated edges. The first dorsal fin is tall and falcate (sickle-shaped) with a short free rear tip; no ridge runs between the first and second dorsal fins. The large pectoral fins are falcate and pointed.

The coloration is gray to brown above and white below, with a conspicuous white stripe running along the sides. The pectoral fins, second dorsal fin, and the lower lobe of the caudal fin usually have black tips. The pelvic fins and rarely the anal fin may also be black-tipped. The first dorsal fin and the upper lobe of the caudal fin typically have black edges. Some larger individuals have unmarked or nearly unmarked fins. Blacktip sharks can temporarily lose almost all their colors during blooms, or “whitings”, of coccolithophores. This species attains a maximum known length of 2.8 m (9.2 ft), though 1.5 m (4.9 ft) is more typical, and a maximum known weight of 123 kg (271 lb). 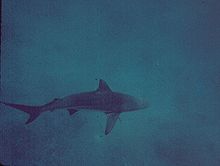 The blacktip shark has a worldwide distribution in tropical and subtropical waters. In the Atlantic, it is found from Massachusetts to Brazil, including the Gulf of Mexico and the Caribbean Sea, and from the Mediterranean Sea, Madeira, and the Canary Islands to the Democratic Republic of the Congo. It occurs all around the periphery of the Indian Ocean, from South Africa and Madagascar to the Arabian Peninsula and the Indian subcontinent, to Southeast Asia. In the western Pacific, it is found from southern China to northern Australia, including the Philippines and Indonesia. In the eastern Pacific, it occurs from Baja California to Peru. It has also been reported at a number of Pacific islands, including New Caledonia, Tahiti, the Marquesas, Hawaii, Revillagigedo, and the Galápagos.

Most blacktip sharks are found in water less than 30 m (98 ft) deep over continental and insular shelves, though they may dive to 64 m (210 ft). Favored habitats are muddy bays, island lagoons, and the drop-offs near coral reefs; they are also tolerant of low salinity and enter estuaries and mangrove swamps. Although an individual may be found some distance offshore, blacktip sharks do not inhabit oceanic waters.

The blacktip shark is an extremely fast, energetic predator that is usually found in groups of varying size. Segregation by sex and age does not occur; adult males and nonpregnant females are found apart from pregnant females, and both are separated from juveniles. Predator avoidance may also be the reason why juvenile blacktips do not congregate in the areas of highest prey density in the bay. Adults have no known predators.

Blacktip sharks are social and usually found in groups. Like the spinner shark, the blacktip shark is known to leap out of the water and spin three or four times about its axis before landing. Some of these jumps are the end product of feeding runs, in which the shark corkscrews vertically through schools of small fish and its momentum launches it into the air.[3] Observations in the Bahamas suggest that blacktip sharks may also jump out of the water to dislodge attached sharksuckers (Echeneis naucrates), which irritate the shark’s skin and compromise its hydrodynamic shape. The speed attained by the shark during these jumps has been estimated to average 6.3 m/s (21 ft/s).

Fish make up some 90% of the blacktip shark’s diet. A wide variety of fish have been recorded as prey for this species: sardines, herring, anchovies, ladyfish, sea catfish, cornetfish, flatfish, threadfins, mullet, mackerel, jacks, groupers,snook, porgies, mojarras, emperors, grunts, butterfish, tilapia, triggerfish, boxfish, and porcupinefish. They also feed on rays and skates, as well as smaller sharks such as smoothhounds and sharpnose sharks. Crustaceans and cephalopods are occasionally taken.[1] In the Gulf of Mexico, the most important prey of the blacktip shark is the Gulf menhaden (Brevoortia patronus), followed by the Atlantic croaker (Micropogonias undulatus).[19] Off South Africa, jacks and herring are the most important prey. Hunting peaks at dawn and dusk. The excitability and sociability of blacktip sharks makes them prone to feeding frenzies when large quantities of food are suddenly available, such as when fishing vessels dump their refuse overboard. 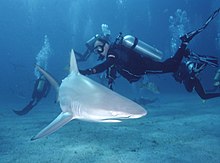 The blacktip shark usually poses little danger to divers. Blacktip sharks showing curiosity towards divers has been reported, but they remain at a safe distance. Under most circumstances, these timid sharks are not regarded as highly dangerous to humans. However, they may become aggressive in the presence of food, and their size and speed invite respect. As of 2008, the International Shark Attack File lists 28 unprovoked attacks (one fatal) and 13 provoked attacks by this species. Blacktip sharks are responsible annually for 16% of the shark attacks around Florida. Most attacks by this species result in only minor wounds.

As one of the most common large sharks in coastal waters, the blacktip shark is caught in large numbers by commercial fisheries throughout the world, using longlines, fixed-bottom nets, bottom trawls, and hook-and-line. The meat is of high quality and marketed fresh, frozen, or dried and salted. In addition, the fins are used for shark fin soup, the skin for leather, the liver oil for vitamins, and the carcasses for fishmeal. Blacktip sharks are one of the most important species to the northwestern Atlantic shark fishery, second only to the sandbar shark (C. plumbeus). The flesh is considered superior to that of the sandbar shark, resulting in the sandbar and other requiem shark species being sold under the name “blacktip shark” in the United States. The blacktip shark is also very significant to Indian and Mexican fisheries, and is caught in varying numbers by fisheries in the Mediterranean and South China Seas, and off northern Australia.

Anchovy in the Sardine Run The anchovy is a small, common salt-water forage fish of the family Engraulidae....