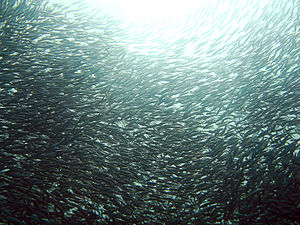 Sardines are small epipelagic fish that sometimes migrate along the coast in large schools. They are an important forage fish for larger forms of marine life. “Sardine” and “pilchard” are common names used to refer to various small, oily fish within the herring family of Clupeidae. The term sardine was first used in English during the early 15th century and may come from the Mediterranean island of Sardinia, around which sardines were once abundant. The terms “sardine” and “pilchard” are not precise, and what is meant depends on the region. The United Kingdom’s Sea Fish Industry Authority, for example, classifies sardines as young pilchards. One criterion suggests fish shorter in length than 15 cm (6 in) are sardines, and larger fish are pilchards. The FAO/WHO Codex standard for canned sardines cites 21 species that may be classed as sardines. FishBase, a comprehensive database of information about fish, calls at least six species “pilchard”, over a dozen just “sardine”, and many more with the two basic names qualified by various adjectives. Sardines feed almost exclusively on zooplankton, “animal plankton”, and will congregate wherever this is abundant.
Typically, sardines are caught with encircling nets, particularly purse seines. Many modifications of encircling nets are used, including traps or weirs. The latter are stationary enclosures composed of stakes into which schools of sardines are diverted as they swim along the coast. The fish are caught mainly at night, when they approach the surface to feed on plankton. After harvesting, the fish are submerged in brine while they are transported to shore. 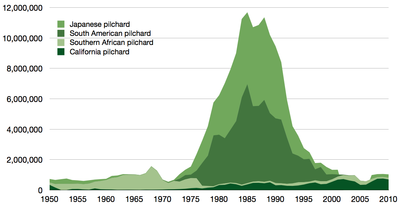 Sardines are commercially fished for a variety of uses: for bait; for immediate consumption; for drying, salting, or smoking; and for reduction into fish meal or oil. The chief use of sardines is for human consumption, but fish meal is used as animal feed, while sardine oil has many uses, including the manufacture of paint, varnish and linoleum.

In the Sardine Run

In South Africa the species of sardine found is the South American pilchard (Sardinops sagax). This species of sardine is found in the Indo-Pacific and East Pacific oceans. Its length is up to 40 cm (16 in). It has other names, some of which more appropriately refer to subspecies, including blue pilchard, Australian pilchard (S. s. neopilchardus), blue-bait, Californian pilchard (S. s. caeruleus), Chilean sardine (S. s. sagax), Japanese pilchard (S. s. melanostictus), Pacific sardine, and Southern African pilchard (S. s. ocellatus). The distribution of sardine in South Africa are typically limited to the southern and western coasts where water temperature is below 20’C. Only during the annual sardine run does a small finger of cooler water extend along the eastern seaboard opening up a migratory pathway for the sardines, and resulting in what is commonly termed the greatest shoal on earth.

Anchovy in the Sardine Run The anchovy is a small, common salt-water forage fish of the family Engraulidae....