Anchovy in the Sardine Run

The anchovy is a small, common salt-water forage fish of the family Engraulidae. Anchovies are found in scattered areas throughout the world’s oceans, but are concentrated in temperate waters, and are rare or absent in very cold or very warm seas. They are generally very accepting of a wide range of temperatures and salinity. Large schools can be found in shallow, brackish areas with muddy bottoms, as in estuaries and bays. Anchovies are small, green fish with blue reflections due to a silver-colored longitudinal stripe that runs from the base of the caudal fin. They range from 2 to 40 cm (0.79 to 15.75 in) in adult length, and their body shapes are variable with more slender fish in northern populations. Whilst there are over 14 species of anchovy described, the only species that occurs in South Africa is named Engraulis capensis that grows to a total length of 17.0cm.

Whilst South Africa’s sardine run is named after the dominant shoaling bait fish the sardine (Sardinops sagax), numerous shoals of other bait fish, including anchovy, are frequently encountered occurring in the cool counter current stream that extends along the eastern Cape of South Africa. Experienced divers and dive operators will readily be able to distinguish an ‘anchovy’ shoal from a sardine shoal by behavior and the appearance of the bait fish (typically smaller). Interestingly, the relative abundance of anchovy and sardines seems to oscillate over time, with abundance dominance alternating between these two species. 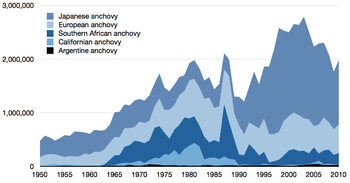 The anchovy is a significant food source for almost every predatory fish in its environment, including the Cape gannets, Cormorants, kingfish, tuna, sharks, and Bryde’s whale. It is also extremely important to marine mammals and birds.

Anchovies, like most clupeoids (herrings, sardines and anchovies), are filter-feeders that open their mouths as they swim. As water passes through the mouth and out the gills, food particles are sieved by gill rakers and transferred into the esophagus.